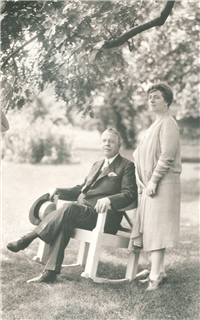 Walsh Jesuit High School was funded by a generous gift from the late Cornelius and Jane Walsh. Cornelius Walsh was born in 1864 and lived his entire life in Cuyahoga Falls, where he was a prominent industrialist and Catholic layman.  When Cornelius Walsh passed away in 1932, he bequeathed his entire fortune to his wife, who continued to donate generously to the Catholic Church.
In 1943, Jane Walsh worked with her nephew, William A. Walsh, to design her will, which included a large sum of money for a Catholic high school to be built. William Walsh was partial to the Jesuits. He convinced his Aunt Jane to bequeath to the Society of Jesus her property and $100,000 for the building of an all-boys school that would be a memorial to her husband.  William Walsh approached the Chicago Province of the Jesuits, but the gift lay dormant for years.
In 1959, the original offer made by the Walsh family was found during a transfer of files from the Chicago Province to the Detroit Province. At almost the same time, Fr. McGrail, Provincial of the Detroit Province, received a phone call from William Walsh who urged him to reconsider the proposal made in his Aunt Jane's will. Under William Walsh's stewardship, her gift had grown to nearly $2 million. Using the gift from Cornelius and Jane Walsh (to which the Cleveland Catholic Diocese added $1 million) 50 acres were purchased from the Conway family, with an additional 50 acres purchased later to establish where Walsh Jesuit would be built.

Jane Walsh passed away in July 1963 at age 89, about 24 months before Walsh Jesuit opened. She knew, however, that plans were under way for the school because Fr. McGrail (who would become the school’s seventh president) visited her often. Unfortunately, she did not live long enough to see the completed memorial to her husband.

Groundbreaking ceremonies for Walsh Jesuit took place in 1964, and the school opened its doors to 153 freshmen on September 7, 1965. The school was dedicated in May 1966, and the first class graduated in 1969.

Walsh Jesuit, alma mater, we raise our voice to thee;
Thy cross and crown above us shine to guide us faithfully.
With a warrior’s heart and spirit, and Heaven’s grace untold,
May we be worthy of thy mission, fit to wear the maroon and gold.

-Music and lyrics by Zachary Gustafson (‘96)

We are Walsh Jesuit Warriors …
Men and Women for and with Others.

Centered in Christ and guided by Catholic principles,
We fight for life. For truth. And for inclusion.
We advocate for peace and justice.
We serve our communities with love and cultural humility.

We battle for what’s right
With compassion and mercy,
Through opposition and adversity,
As the holy Warrior Saint Ignatius Loyola taught us.

Honoring our Jesuit heritage,
We embrace cura personalis …
Protecting and caring for the whole person,
Soul, mind, and body.
We are Warriors who pray every day
With open minds and hearts
For the courage to grow, to strive for excellence, in all we do.
To be champions of positive change in the world.

As a Christ-centered community, we strive to be Men and Women for and with Others.